The HSIOIRS Scholarship "Spyros Georgaras" was established in 2007 in honor of Prof. Sp. Georgaras, founding member of HSIOIRS. 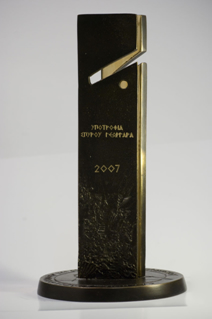 The Board of Directors of the Hellenic Society of Intraocular Implant and Refractive Surgery, following a proposal by the former President Mr. Vas. Tsigos, established in 2007 the HSIOIRS Scholarship “Spyros Georgaras” in honor of Prof. Sp. Georgaras, for its excellent, long-standing and multifaceted contribution to the community of ophthalmic surgeons.

The first Scholarship was awarded in February 2007 to Mr. Stergios Liapis, in 2008 to Mr. Georgios Kaparounakis, in 2009 to Mr. Georgios Kymionis, in 2010 to Mr. Konstantinos Samaras, in 2011 to Mr. Vassilios Liarakos, in 2012 to Mr. Dimitrios Bouzoukis and Michalis Tsatsos, in 2013 to Mr. Panagiotis Georgoudis, in 2014 to Mr. Vassilios Diakonis, in 2015 to Mrs. Sotiria Palioura and Konstantinos Tsaousis, in 2016 to Mr. Zisis Gatzioufas, Mr. Lambros Lambrogiannis and Mrs. Dimitra Portaliou, in 2017 (in another form) to Mr. Konstantinos Andreanos, Mr. Panagiotis Giannakouras, Mr. Nikolaos Kasimatis, Mr. Georgios Kontadakis and Mrs. Ioanna Metaxaki,

Due to the extraordinary circumstances created by the COVID pandemic, the Scholarship was not awarded in 2020 & 2021.

This year the HSIOIRS Scholarship supports the research!

Aiming to encourage independent research in the field of cataract and refractive surgery, HSIOIRS offers the “Spyros Georgaras” scholarship to support Greek colleagues who wish to conduct relevant clinical studies.

The HSIOIRS Scholarship “Spyros Georgaras” for 2022 was awarded to Mr. Georgios Lampiris.

Close Menu
We use cookies on our website to give you the most relevant experience by remembering your preferences and repeat visits. By clicking “Accept All”, you consent to the use of ALL the cookies. However, you may visit "Cookie Settings" to provide a controlled consent.
Cookie SettingsAccept All
Manage consent

This website uses cookies to improve your experience while you navigate through the website. Out of these, the cookies that are categorized as necessary are stored on your browser as they are essential for the working of basic functionalities of the website. We also use third-party cookies that help us analyze and understand how you use this website. These cookies will be stored in your browser only with your consent. You also have the option to opt-out of these cookies. But opting out of some of these cookies may affect your browsing experience.
SAVE & ACCEPT